Come on!  REALLY, you expect me to believe such an outlandish tale?

As a Westerner and an academic, I have been trained to question preposterous stories about those things that are unseen.  Yet the more I come to Liberia and the more I hear, the less certain I am about my understanding of the spiritual realm around us.

For we are not fighting against flesh-and-blood enemies, but against evil rulers and authorities of the unseen world, against mighty powers in this dark world, and against evil spirits in the heavenly places.   Ephesians 6:12 (NLT)

On Wednesday mornings we have small groups and are studying Neil Anderson’s book, The Bondage Breaker.  I was leading the group and I told them that most American Christians, based on my observations, do not think much about the spiritual world around us.  The students found this interesting because to them the spiritual world is just as common as the natural environment.   As one student said, “There is a saying that you do not die a natural death.”  Otherwise when most people die it is because someone has put a hex on you that causes death.

Another student pointed out that in Liberia and all of Africa, most children are raised to carry out rituals that evoke spirits to bring good luck or to keep evil spirits away.  He said that one ritual is to ask the spirits for a good harvest.  Now here is where it sounds a little crazy.  My student told me that in a community, especially in the interior, some people are called to play special roles in their dreams.  For example, children may become groundhogs, women deer, and some men are leopards. (I had a very perplexed look on my face.)   He continued by telling me that it is not unusual for these “specially called” children to turn into “ground hogs” at night in their dreams and eat the rice that has been planted.  I asked all of them, “Do you believe this?”  They all smiled at me in that knowing way when you are talking to someone who is ‘very naïve’ and said, “Yes of course.”  I asked,  “How do you know this is true?”  The student said because you see evidence on the children’s body that they have been out in the bush (e.g. they wake up with scratches on their arms and other tell-tell signs that they have been where the rice is grown).   He said these children who have been called on by the spiritual world to act as groundhogs also become very thin.  He explained when you eat the food in the spiritual world you are not allowed to eat the it in the real world because you already have had your portion.

Markings on the house to ward off evil spirits

I know you are beginning to think that I am going off the deep end, because this is so hard to explain and wrap your head around.   Last week alone, I have heard three different stories from three different students about their experience in the spiritual world before they became Christians.  The stories all have a common theme of oppression and depression.  All three students would tell you that it is a form of bondage where you fear for your life even if everyone else sees you as powerful.

One of my students, who I have great respect for, was initiated into the “leopard society.”  This happened to him when he was young.  His uncle believed that the gift of being a leopard had been passed down to him through the family line.  His mother was hesitant, but she let the “Zoe” (witchdoctor) come to the house and perform a ritual of placing a mixture of herbs on his eyes.  He said that he immediately had a vision where he saw himself as a leopard and began to paw like a leopard in the dirt.  His family watched him paw in the dirt and to them it was confirmation that indeed he was “an anointed” child that was sent to protect his family.

Of course, I asked a lot of questions.  I inquired, “How do you know that the herbs didn’t have something in them to cause you to hallucinate?” He said he could not answer that but what he could tell me is that other people who have been called to work in the spiritual realm recognize you.  As a boy, people would come up to him and ask him not to tell others about them and what they were doing.  Since he was a leopard, he was considered very powerful even though he was a child.  He could see things in the spiritual world and knew what they were doing.

He also told me that when you are a leopard you have great prowess in hunting that other people do not.  At night he would have visions of hunting and killing a deer and eating part of it.  The next morning he would tell his mother where she could find the slain deer in the forest, and she would go and find it where he told her to look.  He was not allowed to eat any of the deer because he had already had his portion in the dream.  Whenever they brought an animal home that he had killed in his dreams, he would have to live at another house for four days until it was safe for him to come back home.  He said if he ate any portion of the deer or stayed at his home during those day he would die. 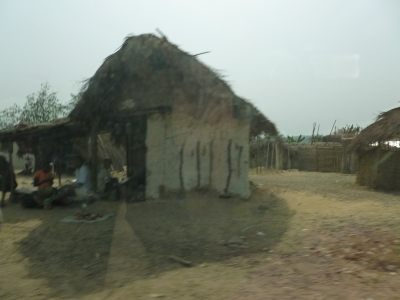 Another house with special markings, which are thought to protect against evil spirits

His uncle then wanted him to become a Zoe, but his mother said no.   His mother was frightened because she knew if he took on that role others would surely try to kill him.  In this type of world jealousy and hate is all encompassing.   Evil permeates whatever is done and the only way to succeed is by killing someone more powerful than you are.   His mother took him back to Monrovia for fear of something bad happening to him.  My student told me that is when he became a Christian; the bondage was broken and he no longer lives in fear because of the blood of Jesus Christ.

This student wants to have a ministry to his people.  His wife is fearful every time he talks about going back.  She is still afraid that there are many who will try to kill him.  (As a mother and wife living in this fallen world, I can understand her fear because she wants to protect her husband and family.  However as women, we must remind ourselves that when God calls us or a family member to a ministry that we do not walk by our own power or might but by the Spirit of the Lord Almighty.)

Hmmm, I am still trying to understand this.  What he told me sounded so absurd that I asked the student to explain it to my husband.  He told him the exact same story with little or no deviation.

Is this just folklore?  I am not so certain anymore.  What I do know, and this student would confirm, is that it is the power of God on which we must focus.  Satan and his dominions are spirits of deception while Christ is the spirit of truth.   It is through the blood and truth of Christ that we can live a life free from bondage. 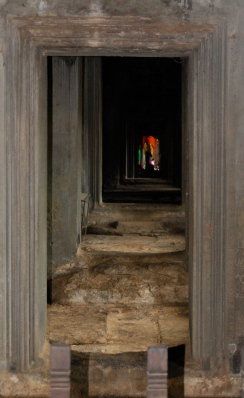 What is a Think Through?  it is an idiom that conveys the meaning of carefully considering possibilities and outcomes of a situation.

This week’s Think Through:  What do you think?  Do you think the information that I have just shared is a cultural “mindset,” with little basis in reality?  Or, do you believe that Satan and his demons are that visible in our world today?